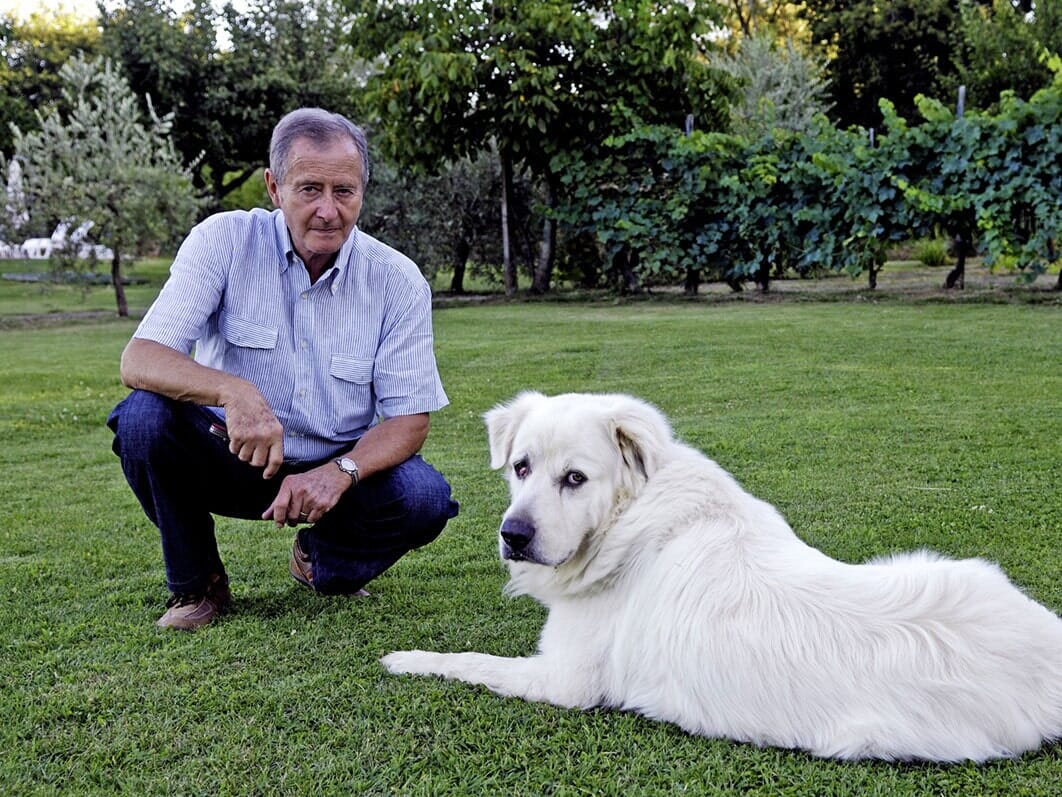 I, who never stopped loving the place where I spent my childhood and youth, after living 35 years in the city and having worked for 29 years in a Banking Institute, for various reasons, decided, supported by my wife Angela (teacher) and asking for a sacrifice to my son Francesco, eighteen at that time, to return to live in the country and restructure the farm abandoned to itself for years.
On 1/1/1998 begins the new adventure next to Siena.
The personal house was already renovated, so all the efforts were directed to work to start the new business.
The first goal was to cultivate the land and the existing vineyards in the best way possible and I was very lucky because I met two special people who taught and helped me for several years: Piero and Armando.
Second goal was to create a farm and the most important thing was to find a nice name that impressed the memory of tourists.
During a dinner with former colleagues of the bank, someone suggested “Sole Verde” that I turned into “Il Sole Verde” suitable for the farm and for the farmhouse.
In 24 months, thanks to the active help of Angela, the farm was set up and in April 1999 had its first client: Mr. Roberto. A few months later, in 2000, the full regime was reached.
From then on, continuous improvements have been made, always suggested by Angela’s imagination, very sensitive to the needs of the guests and to my industriousness.
In the meantime, Francesco was in charge of the office while Agnese, his girlfriend, kept public relations in German Language.
Very important was also the work of my parents in-law who immediately took care of many maintenance details and embellishment of the environment.
Precious was wisdom and optimism of my father-in-law Antonio who has always encouraged me to go on.
Once finished with the farmhouse, there was to take care, to improve and to give birth to the farm.I started replanting new vineyards and building a new one that I populated by buying 500 olive trees from my sister.

I will not dwell further and I entrust all the memories, the suggestions, the lessons learned and that allowed me to grow Il Sole Verde respecting the values and traditions that, unfortunately, today’s youth are forgetting to the Blog and to those who will read it, allow me, however, to spend a few words to explain what for me, indeed for us, including the new arrival, the granddaughter Emma (because in the meantime Francesco grew up and Agnese became his wife) means “hospitality”: the be welcoming is always be ready to receive our guests making them feel “at home”, assist them in every need and enjoy, with courtesy and discretion, their company, better if accompanied by a glass of good wine, such as a beautiful red Solarius!
We have hosted so many people and we can say that we have many new friends that we love as part of a large “extended” family.
At the end of this short story I would like to mention the important presence of my two beloved dogs, Orso and Lassy who have been for years our discreet and faithful friends and it is thanks to them that this my farmhouse, a few kilometers from Siena, has managed, immediately, to create that warmth and that feeling of “family” (which have always distinguished us!) with guests who, from time to time, come to stay here.
An immense thought goes to the substitute of Bear and Lassy, Ercole, “The Guardian” who left us in October 2017.

An adventure started at the age of 51 that I recommend to all those who have a farmlaqnd, a passion and a family like mine.

Il Sole Verde: family hospitality in the center of the historical-cultural triangle of Florence-Siena-Arezzo. The farmhouse offers the quiet of nature, among wide meadows, olive trees, vineyards and woods.It has five independent apartments of various sizes, completely recovered and restored by Guidi family.A large swimming pool, relaxation and common areas complete the structure.Hospitality and any kind of assistance are guaranteed by the constant presence of the owners who live in the main house of the complex.The fortunate geographical position allows guests to easily reach the main cities of art, typical villages and the most fascinating natural landscapes such as the Chianti Classico and the Crete Senesi.